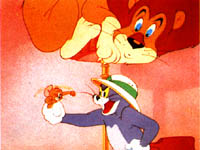 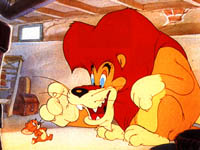 Biography
He's an escaped Circus Lion that can't take circus life anymore. His one desire is to get back to Africa and he enlists Jerry's aid to do so.

Relationship to Tom and Jerry
Jerry's friend who helps him get home. Protects Jerry from Tom.

Featured Cartoons
"Jerry and the Lion", 1950