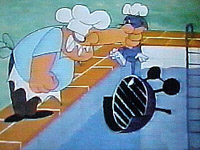 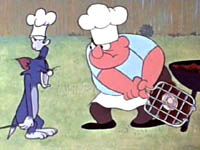 His name is not mentioned though this character resembles Clint Clobber who Gene Deitch created in the 1950's at Terrytoons.
Information taken from Pietro's Gene Deitch Tribute Page.

Relationship to Tom and Jerry
Owner of Tom.