Man! The updates just keep coming this month. The 12th of November is the 4th time this month that I've added some things.

Today I bring you information on Scott Bradley, the brilliant composer of music for Tom and Jerry, courtesy of Peter Morris, lecturer in Film Music at the University of Surrey in England. He's also looking for any information about Scott Bradley and/or Carl Stalling, he's working on his PhD. So if you have anything send him an email at P.Morris@surrey.ac.uk and send it to me as well. I'm always looking for more info on anyone that was involved with Tom and Jerry.

Thanks Peter for the information on Scott Bradley!

After a rather bland and dreary day today the 6th of November, Kamran informed of something FANTASTIC! At least for me and my ego :-] This site made "Site of the week" at Pars Online. It's awesome to see how universal these cartoon characters are!

Thanks Kamran for the heads up!

The Japanese are sooo lucky. First the get the DVD Box now I stumble upon this site http://www.ne.jp/asahi/tom-and-jerry/goods/komonohtm/accessories.htm.
For those into antiques:
From England: http://www.vintagestuff.co.uk/tom_&_jerry.htm

The first full week of November and the first day of the week, Sunday the third brings you the update that has been promised:

I've updated the Wallpapers with 2 new images.
I've added 9 new pictures to the gallery. They're on page 15.

In other news, I received an email the other day from a source that I have been dreading getting an email from since I put this page up...Warner Brothers. To my surprise it was a good email! They wanted me to let you guys know about Chuck Jones: Extremes and In-Betweens the new DVD about Chuck Jones. I don't know if it has any Tom and Jerry info in it. I would assume that it would since Chuck did a few Tom and Jerry toons, but I really don't know.

Check out the Press Release! 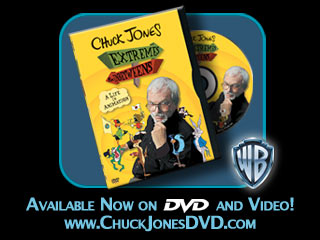 The eve before Holloween and I'm back from my trip and ready to get busy with some updates. First off I want to say I LOVE Europe....I found a lot of Tom and Jerry Stuff out there, it depressing coming back to the States and having no Tom and Jerry products to purchase. I'll be scanning some images from the products that I bought. I also have a few other things in the works as well. Stay tuned! I should have some stuff up this weekend...hopefully :-]


Oct. 10 - Apology.
I would like to apologize for bringing your hopes up that I would have updates by now. As such, life and computer problems have prevented me from posting anything new. Unfortunately for the site, I will be heading out of town...well, out of country, for a 2 week journey; so there will be no updates till sometime around the end of October. I want to update and need to update, but I haven't had the time to devote to the site. I should still have access to the internet while I'm gone since I will be frequenting the internet cafe's...I'm such an addict....so I will be able to answer your emails, though the response time will not be as fast as the usual response time. Thanks for your patience.


Today is Sundy the 15th of the month of September and well, my life has sort of settled down from my move and I now I have some time to do a little updating. I'm working on getting some more images up on the site in a couple of weeks so keep a look out for them.

"Just to let you know that, according to www.blackstar.co.uk there will be volumes 5 and 6 of Tom & Jerry on VHS (pal) released on September 9th 2002. It does not yet say which episodes will appear."
Thanks Dean for the info!

Plus on the collectors front, here's something interesting:

"Pick up a current DC comic book (batman will do), the most recent DC issues feature beautiful 2 page center fold ads for War of the Whiskers. The ads are in full color and feature a great image of Jerry whalloping Tom with a mallet. There are a couple of shots of the game and the standard advertising fare about the game's features.

Here's where it gets interesting: Each game aparently comes packaged with a "free" T&J comic book produced by DC Comics! These are the same people that bring us Batman and Superman every month so the quality could be high.

Of course, as is typical with these cheesy promotional give aways the comic book could be a low budget 6 page rush job that misses the point of our beloved cartoon stars. In any event it will sure interest collectors."

I haven't picked up the comic yet, but it's on my shopping list :-]

Oh! Here's a bit of news. The TV Guide poll has Tom and Jerry down from it's first place position, beaten by Homer Simpson. Though I am a big fan of the Simpons, I still think Tom and Jery needs to regain the throne of Number one :-] So if you want to vote again here's the address: TV Guide.com