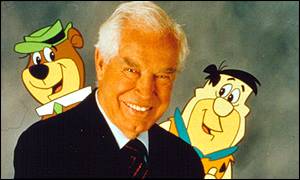 William Hanna - the American animator behind classic cartoons such as Yogi Bear, The Flintstones and Scooby Doo - has died at his home in Los Angeles, aged 90.

With Joseph Barbera, 89, Hanna was the dominant force in American cartooning for more than half a century, creating Tom and Jerry - which won a record seven Academy awards.

In the 60s, the pair moved into television, created series after series which appealed to children and parents alike.

The Flintstones, The Jetsons, Wacky Races, Top Cat and Inch-High Private Eye were all products of the studio with which Hanna remained involved until his death.

Cartoon Network, a 24-hour satellite, digital and cable TV channel which screens many Hanna Barbera favourites, said: "William Hanna will be remembered as one of the all-time great animators.

"The cartoons he made are truly timeless and will continue to entertain generations of children and adults alike.

"His legacy will live on in the pantheon of cartoon stars that are enjoyed by millions the world over."

Leading British animator Bob Godfrey, creator of Roobarb and Custard and Henry's Cat, told BBC News Online: "Bill Hanna has a very big place in animation history. He was on a par with Tex Avery.

"Tom and Jerry were really fantastic. They took a bit of stick for being sadistic - but they made people laugh and won Oscars and all that.

"I met him [Bill] once. He was an old-fashioned cartoonist - a trace and paint man, shooting on film cameras, whereas now everything's done on computer.

"They took the cat and mouse idea to its logical conclusion and they used soundtracks tremendously."

And Steve Box, the director and an animator at Aardman Animations, which produced Oscar-winning Wallace and Gromit also paid tribute.

He told BBC News Online that Top Cat, Scooby Doo, The Flintstones and Wacky Races were the "mainstay of my childhood TV diet and I loved them".

"They seemed to have been made just for me and I never felt patronised by them - they had their roots in more adult American TV shows," he said.

"I thought they were converted perfectly into some of the best animated films ever made, not because they were economical and extremely well-written with great characters.

"I've always loved them, he's always been a great influence and it is a very sad loss."

Born in New Mexico in 1910, William Hanna studied engineering, but lost his job in the Depression.

As he could draw, he found work in cartoon production on the West Coast.

In 1930, he joined Harmon-Ising Studios, which created the Looney Tunes and Merrie Melodies cartoon series.

Within a month, he had teamed up with Joseph Barbera and the greatest team in American cartooning was born.

Their first production - Puss Gets The Boot - was prophetic, winning an Oscar nomination.

After MGM closed its animation division in the 1950s, Hanna and Barbera moved into TV, founding their own company - Hanna-Barbera - in 1957.

Three years later, Fred Flintstone and his sidekick Barney Rubble appeared for the first time, a parody of the film The Honeymooners.

After the stone age, they tried the space age with The Jetsons.

Many others followed: Top Cat, based on the Phil Silvers character Sergeant Bilko; Wacky Races with Dick Dastardly and his sniggering hound Mutley; Yogi Bear; The Hair Bear Bunch and Hong Kong Phooey.